First additions to the line of products were garment patterns and smocking instructional booklets. As time went on, instructional materials for items that could coordinate with many of the smocking designs were added. (Hair bows, or even tote bags, can be constructed to accent smocked garment.)

Creative Keepsakes, Inc. has now grown to include over 70 smocking design plates, a variety of garment patterns, and six instructional booklets. Machine Embroidery designs are also becoming a part of the line of products. Because of the busy schedules of many Creative Keepsakes' customers, an emphasis on "quick and easy" patterns is always a major focus. 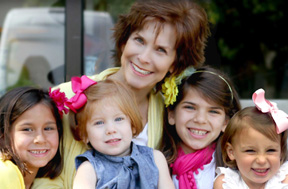 Diane Bruce has been the owner of Creative Keepsakes since 1981 and has done the major portion of the design work. She first began creating smocking designs for her children when they were young. Caterpillars (for Courtnay), clowns (for Clint) and turtles (for Tanner) were among the earliest smocking designs.

In addition to design work for Creative Keepsakes, Diane created a collection of quilted projects which was published by Leisure Arts. The items in this leaflet, Quilts and Totes for Little Folks (# LA 3650), coordinate with many of her smocking designs. Diane has also designed children's clothing patterns for Simplicity Pattern Company of New York.

With a master's degree in education, Diane has managed to combine her love of design with teaching. While teaching classes at a community college near her home, she is also studying web design. Although time for smocking and sewing has been limited during these most recent school activites, she plans to begin publishing new items in the near future.

On a more personal note...

In 1986, after living in Arkansas her entire life, Diane and family moved to Dallas to take advantage of a business opportunity for her husband. In the years that followed that move, Creative Keepsakes continued to grow, Diane's children became adults and she reports that life was full of blessings. Like all families, they also had their share of sad times. She says that their faith and the support of family and friends carried them through the sad days. Those situations sometimes slowed the growth of Creative Keepsakes, but the love of sewing & design remained a part of Diane's life. Those activities often provided a bit of calmness during some of the more difficult times. Diane's hope is that the use of her creations might do the same for others when they find themselves in need of a diversion from the stresses that are frequently a part of life.

Diane now resides in Hot Springs, AR. Those three children, for whom she loved to smock so many years ago, have continued to make her a very proud mother. Two wonderful daughters-in-law and four precious "grandgirls " are now a part of her family. Diane reports that the girls have added abundantly to the joy of the Bruce family and have been the primary inspiration for some new Creative Keepsakes projects. Because of the girls, Diane says that Creative Keepsakes will most certainly continue to grow.